Anita is the daughter of Ram, a secretly deep-in-debt businessman. About to marry a wealthy suitor, Anita meets a rugged soca singer, Lee, hired at the last minute to perform at her engagement party. Sparks fly, and soon the two have fallen for each other. Nikhil, Anita’s malevolent, future brother-in-law, notices. Once he discovers the truth about Ram’s finances, he threatens to expose everything, forcing Anita to fight for the wealth that truly matters—love. 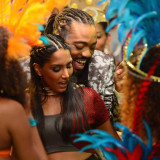